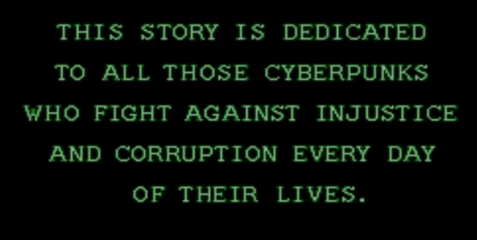 You're here because you know something. What you know you can't explain, but you feel it. You've felt it your entire life, that there's something wrong with the world. You don't know what it is, but it's there, like a splinter in your mind, driving you mad.

Morpheus, from the film The Matrix.

If you’ve clicked your way to this website today, chances are it’s because, like me, you remember the internet the way it used to be, before the likes of M*rk Z*ck*rb*rg and J*ck D*rs*y staked their claim on it. Or, perhaps you’re curious about a web you never knew, one that was already gone before you ever had a chance to experience it.

Regardless, it’s possible that like many people today, you’re consumed by the sense that something isn’t quite right. That at some point, we took a wrong turn, that things developed down a wrong path - not just in regards to the way the internet turned out, but things in general. People joke about this being the "darkest timeline" but lately it doesn't feel so much like a joke anymore.

We see evidence all the time that the social media companies are partly to blame for this downward spiral - spreading misinformation, invading our privacy, mining and exploiting our personal information, brainwashing our loved ones, helping the fascist agents of fear, hatred, and bigotry to radicalize and assimilate new adherents, and profiting from all of it. As the saying goes, “If You're Not Paying For It, You Become The Product.”

"The Blockchain" and its cultists are not going to save us; all they are looking to do is make a quick buck and cash out. The problem of neoliberal capitalist exploitation will not be solved by capitulation to even sketchier and griftier forms of capitalism. Both the social media giants and the proponents of “Web 3” have one goal; wholesale commodification of society and everyone and everything in it - and unfortunately, hate sells.

Over the past decade or so, I too found myself becoming a slave to the “Web 2.0” Social Media Algorithm, before I remembered that I used to enjoy working on personal websites in my spare time in the days before the social media “walled gardens” began their takeover of the web.

Cyberspace used to be a glorious anarchy of creative communication and personal expression, unfettered by the controls and invasive algorithms of the current social media platforms. In a society where everything, including rebellion, is commodified and marketed back to us, individual creative expression can be seen as a revolutionary act.