1/30/2022: Matrix Resurrections dropped, the new year dropped, and I redesigned the site again. This is all still a work in progress, as I reaffirm the original mission statement that led me to create it in the first place - an escape from the Web 2.0 Social Media "Walled Gardens" of Facebook and Twitter, and as a stab in the dark against the idea of a "Web 3" where literally everyone and everything is commodified.

5/9/2021: It's always hilarious when some pundit tries to downplay the delusional or fascist thing, and Republicans are like "NO WE TOTALLY MEANT THE DELUSIONAL, FASCIST THING." 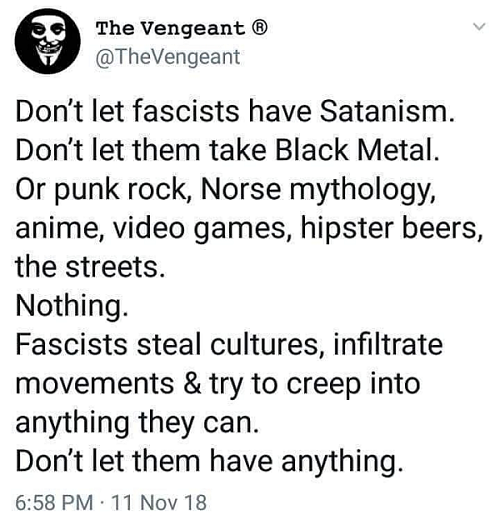 1/23/2021: One year (almost) later and the site is finally coming together for real as I decide how I want to do things from now on, and turn it into a functional space I can really use. I already have a blog on Dreamwidth, but I figured this might be good for general updates and such.

I also added a playlist using the 8tracks service, and I make mutiple ones and rotate them out depending on which one suits my mood.

I'm still struggling with my addiction to tw*tt*r and to doomscrolling, even after Joe Biden was finally sworn in. It sounds ridiculous - and it's probably more of an indicator of how helpeless we all felt than anything else - but it really did feel like we were waging a war for the soul of America on tw*tt*r over the past four years.

But since Darth Twitler has been deplatformed from pretty much the whole entire internet, the whole thing has devolved into Democrats and Leftists fruitlessly yelling at each other while NYT shows its entire ass, engaging in the same bullshit narratives and tactics that help to enable the rise of Darth Twitler in the first place - with the most recent screwup being the firing of Lauren Wolfe.

Yes, we've won a big victory, but we can't afford to rest. Twelve years ago, a bunch of us decided the fight was over and the GOP were no longer a threat after George W. Bush and his neoconservatives were voted out of office, allowing the Tea Party to metastacize and win a bunch of elections. Now we have to fight to keep the fascists who used the Tea Party and Darth Twitler's bullshit populist uprising as a springboard to sieze power from ever regaining that power. No member of the GOP who supports Darth Twitler or his movement deserves to hold office ever again.

But aside from that, I want to get vaccinated. I want this pandemic to be over. I want to go back to Sharkey's.

2/14/2020: The general look and feel of the site is pulled together, and one essay is done. I'm offically declaring the site "open."